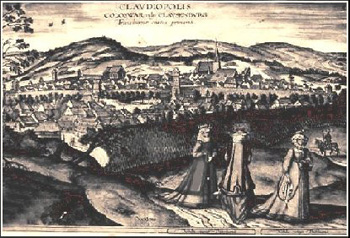 Cluj-Napoca, the historical capital of Transylvania, is one of the most important cultural and economical cities of Romania. It lies in the centre of the country, at the crossroads of many national and international highways.

The fifth town of the country, Cluj-Napoca is a city with two seperate names: Napoca - the name of the ancient Dacian fortress and Cluj, which comes from the Latin word "clusum". Clusum means to be 'closed', and this is due the fact that Cluj is protected by the surrounding hills. The city has been known by its German name - Klausenburg, or its Hungarian name - Kolozsvar, being also a very important cultural and political centre for the Transylvanian Hungarians.

Located along the Somes river valley, Cluj's surface is about 180 sqKm and the population is over 320,000 resident inhabitants and about 100,000 students.

The territory of Cluj has been inhabited since ancient times (paleolithic). At the site of an old Dacian fortress, a Roman castrum was built after the Roman conquest of Dacia (106 AD). By the year of 124 AD, our city was upgraded as a Roman "municipium" having the official name 'Municipium Aelium Hadrianum Napocense', which afterwards became the capital of Dacia Porolissum.

The constant pressure of people migrating along the vast, exposed boundaries of Dacia led the emperor Aurelian to withdraw the Roman army and administration in 271-275. The upper classes and many urban dwellers followed, but the majority of the population who lived in the countryside were engaged in agriculture and stayed behind. For nearly 800 years after the Roman withdrawal, Dacia was overrun by a series of people migrating: the Visigoths, the Huns, the Gepidae, the Avars, the Slavs.

Beginning from 11th Century, some Romanian local political and admistrative formations emerged in the former Dacian region. The Hungarians, who settled in Pannonia at the end of 9th Century, entered Transylvania during 10th Century and overwhelmed the Romanian kniezates (local administrations) that they encountered here.

Being under Hungarian domination, Cluj receiving on the 19th of August 1316 the "civitas" title, which practically means the status of being a town. The events of the next couple of centuries were dominated by the ascent of the Ottoman Empire, with the whole Balkan region becoming a Turkish ruled territory. While Transylvanian coat of armsthe Hungarian kingdom disappeared and Hungary was transformed into a pashalik, Transylvania became a self-ruling principality (1541) that also recognized the Ottoman suzeranity.

The first signs of modernity occured between the 16th and 17th Centuries when the first printing press was set up by Gaspar Heltai (1550). In the following decades, the town was enlarged over the medieval walls, the roads were paved, and the mail service was established. Transylvania then suffered a very turbulent period with several annexations to the Hasburg Empire and then being incorporated into Hungary after the dual Austria-Hungary state was created (1867). The defeat of the Hapsburg monarchy after the First World War in 1918 made it possible for the nations that had been under Austria-Hungarian rule to emancipate themselves.

In Transylvania the National Assembly called at Alba-Iulia on December 1st 1918, voted to unite Transylvania and Banat with Romania. During World War II, under the "Vienna Treaty" (August 30,1940) Germany and Italy transferred the north-eastern part of Transylvania to Hungary, including Cluj-Napoca, even though the majority of the population was Romanian. As a consequence of the dictat, Transylvania lost an area of 43492 sqkm (2,660,000 inhabitants). Five years later, due to the Peace Treaty of Paris, Transylvania was returned to Romania. During the communist period, the town's population increased substantially, as a result of excessive industrialisation. In 1948 there were 121,753 inhabitants and by 1988 this had reached 314,495. After 45 years of totalitarianism and communism, and the loss of hundreds of lives, Romania once again became a free and democratic country. In Cluj-Napoca, on the dramatic day of 21st December 1989, 27 people were shot for having the courage to say NO to the regime. After such a long and restless history, our city finally found his own peace.

Today, Cluj-Napoca is one of the most important Romanian cities, being a tourist destination itself and a starting point for other tourist attractions.